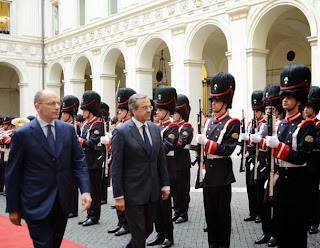 Enrico Letta: Good evening, welcome here. I would like first of all to thank my colleague Samaras for giving me the opportunity to meet on this important day when the ceremony took place in Sicily to commemorate the victims of the tragedy in Lampedusa. During this day we are here to give answers to this tragedy, to both key issues of migration flows and the safety and security of the Mediterranean Sea.
The main issue we dealt with was to be very precise and operational starting from the main key point which is the preparation for the European council that will take place on Thursday and Friday, in order to avoid that during this council the issues would be dealt with in a superficial and generic way, while we want to face the issue of migration in a very serious way.
And secondly, we want to prepare, so to say, fine tune the following presidencies, first of all the Greek one in the first half year of 2014 and then the second half, the Italian presidency. Because we want to have a new approach of migration, of these peak issues and we know that this will be the pillar of both our presidency and of the Greek one.
We set up, that’s why, we did a joint committee that will support the presidencies starting from the conclusion of the European Council on Friday.
There are some real issues we are aiming at- first of all, during the European Council on Thursday and Friday and then of course, during the two presidencies. First of all, we want to strengthen Frontex, the agency for the cooperation of control and migration borders. Then, secondly, we want to set up and start the operation of the Eurosur which will start on the 2nd of December. Then we want to manage and deal issues concerning the right of asylum at European level and then, the fourth issue, is- you probably know- that we set up and started a humanitarian mission called “Mare Nostrum”. And, these four issues will effect strictly what happens in the countries of origin.
As far as Italy is concerned, we are particularly interested in managing Libia, that is to say in the past, these policies concerning Libia were not dealt with as it should have been due to institutional reasons. But, then, of course, we want to continue seriously to control, first of all the migration flows, and, secondly, the shores of the Mediterranean. We’ll particularly consider these two issues first of all in Brussels next Thursday and Friday and then during the whole 2014. But, as I already said, the Eurosur will start on December the 2nd – that is the reason why our humanitarian mission “Mare Nostrum” will end on that day.
It is obvious that we will deal with other important issues during the European Council. Another important issue is the common market of telecommunications and we want to push so that this will be established. Secondly, we want to enforce and apply the bank union, that is the priority we both aim at. We`ll do that during both European Councils in October and December, we want to enforce decisions we took in June. But, as I said, we mainly concentrated on migration issues particularly on this day when we solemnly commemorate the tragedy that took place in Lampedusa. Of course, we want, particularly on this day, give precise answers to those who particularly bear political responsibilities – have to give clear and real answers. 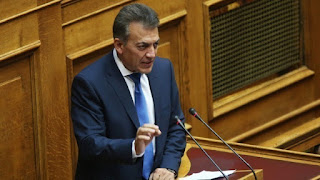